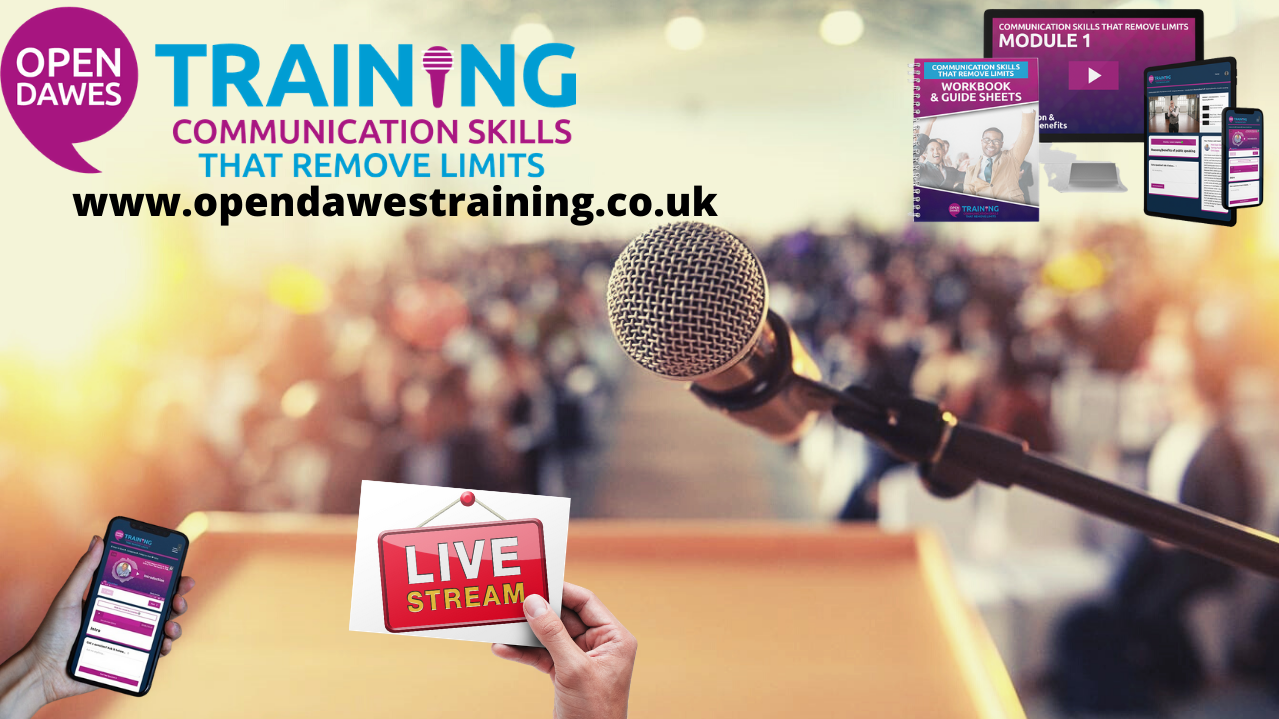 “Opened Dawes” Live is designed to run weekly at Tuesday coffee times (where possible) on Facebook, YouTube and LinkedIn so that we can throw open the doors and welcome you in for a relaxed and interactive sharing of information, tips, thoughts, and answering any questions about public speaking and presentation/communication skills you may have.

All four shows broadcast this June can be watched back at any time, packed with their tips and ms

This episode not only launched the new weekly live show, but also the launch of our hybrid of online/on-demand and face-to-face mentoring "Communication Skills that Remove Limits" programme.

Chris Dawes also looked into why and how public speaking is such a vital set of skills because it is often misconstrued as only being of importance to those that stand up and speak, let alone how many of us could/should do more of that in itself. It may be classed as a "soft skill", but it is important to remember that it is a "soft skill" that gives your "core skills" a voice.

This week’s show was about accepting that when you start working on developing yourself you start off being “consciously competent” (know what to do but have to remind yourself) before becoming “sub-consciously competent” (doing it without thinking). To that end, we will also look around the Open Dawes Training portal and how you get to work through the training, engage in person (not just video/audio lessons), and return as required to the training material over the 12-month access period to take yourself on this journey from one stage to the next without beating yourself up about it.

It also touches on how just doing more of them is not enough, because it doesn't help to just get more natural at doing it below what you could be capable of.

Episode 3: Having a CONVERSATION Rather than Trying To Present

This week’s show looked at how you can switch a mindset, which will naturally also switch your style!

This style will help your nerves, your delivery, how you are received, and the level to which your information can be digested and connected with. It may seem like a throw-away statement, but by “having a conversation” with your audiences/meeting participants rather than falling into the rigid presenter/reporter mindset and method will have huge benefits for both you and those listening to you. The discussion included how tone, emotions, attitude, inflections, etc. are all affected by this switch.

Episode 4: Speed is of the Essence!

This week’s show looked at a habit that is priceless to form because it will impact your nerves, your delivery, your recall, your flow, and dramatically improve the impact and absorption of your information from those you are sharing it with!

Whether the nerves make us speak too quickly, or we get nervous because speaking too quickly increases the chance we will forget and/or make mistakes when presenting, it is probably the hottest topic we cover in our training because of the ratio of people who it applies to. Working on it will impact so many things that I would say that it is the number tip from observations and personal experience and something that needs to be considered ongoing and even by many seasoned speakers.

Episode 5: Speak to the Camera!

This week’s show delved into something that has become much more vital over the last year or so! Communicating via and presenting to a camera, especially a webcam.

Whilst workplaces may be returning to use, there is going to be a degree of home-working remaining, and a reduction in travel to face-to-face meetings, presentations, and training. Webinars have grown in popularity too, but it is not a natural thing for many of us to speak to a black hole in the camera’s lens! So how do we cope with the challenges, and how do we still make it fully engaging? This week we touched the surface of that area of training that we provide to leave you with some thoughts and techniques to make the most out of it.

Next month (July 2021) will have another 3 episodes (6th, 13th, and 20th July), but sadly no show on Tuesday 27th July. To subscribe and be notified of the live shows, subscribe to the Open Dawes Training YouTube channel, and turn on notifications (the bell icon), and/or follow Open Dawes Training's Facebook profile.

You can also view the full "Opened Dawes" Live playlist on YouTube.

How to be effective presenting or meeting online

Lockdown has led to a boom in online meetings, presentations, webinars, demonstrations, and training but how can we be sure to get the most out of them?